I want help to achieve following behaviour in control panel (Downgrade case):
Fresh installation of new seup creates entry in control panel such that it is different from the old setup instllation if user try to install old on top of new.

I do not want to discturb this case(Upgrade case):
If Old setup is already installed, then I am ok if in control panel, old build entry is overwritten by installation of new setup. I do not want separate entry to uninstall from control panel.

2 use cases, last one shows issue in uninstallation:
Consider the scenario New build is installed after old build(Upgrade case):
In case this new build is installed after old build then this new build also checks the old registry if already available and then installs itself to same path where old is installed. Uninstallation from one entry available in control panel is able to uninstall both builds from the folder where these are installed. I am able to achieve one entry in control panel for both installation by keeping the "Upgrade code" same in Instalshield in both builds code.

Is there any feature in Installshield such that Fresh installation of new setup creates entry in control panel and I could see 2 separate entries in control panel if old is installed after new one(Downgrade case)?
I could then uninstall new or old which ever I want to.

DebbieL
Pilgrim
RainyS,
We moved your post from an unrelated thread to this new thread. To start a new thread, visit the appropriate version-specific InstallShield forum page (such as https://community.flexerasoftware.com/forumdisplay.php?308-InstallShield-2014), and click the Post New Thread button; there's one near the top left of the page, above the list of threads: 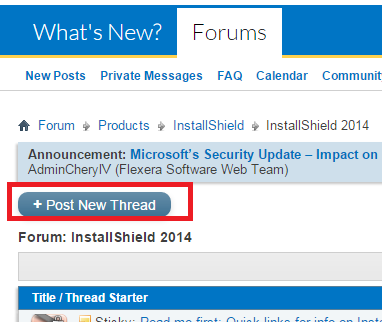