[Incident]: Some users report they are unable to access the case portal. Please see this community notice for more information.

InstallAnywhere installers can be run in three different user interface modes: GUI, Console and Silent. Installers that have the Silent option enabled in the section, Installer UI>Look & Feel>General UI Settings>Allowable UI Modes, can be run in Silent mode using the following command:

For Windows installer, launching the silent installation from command prompt results in two different behaviors depending on what type of launcher is selected. For this information, refer to the KB article Q202863 mentioned in the Additional Information Section below.
In versions of IA prior to InstallAnywhere 2010 SP1, running the installer in silent mode sent output to the console window in both Windows (when using console launcher type) and Linux machines (as shown below), which was not the expected behavior. 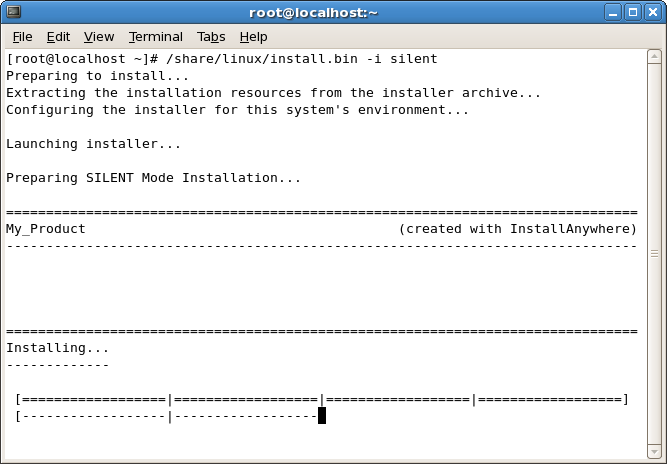 This was corrected and addressed in InstallAnywhere 2010 SP1 and versions thereafter. One should run the installer in Console mode or GUI mode for installations that require any kind of user interaction.

For additional information on Silent installer, refer to the Knowledge Base article Silent Installer On Windows Returns Control To The Command Prompt Immediately.
For information on Windows Install Launcher Type, refer to the Knowledge Base article Windows Install Launcher Type.
Labels (1)
Labels:
Was this article helpful? Yes No
0 Kudos
No ratings
Version history
Last update:
‎Nov 12, 2018 06:46 PM
Updated by:
jlamarche