Do you have any connections created in the "SQL Scripts" section of "Server Configuration" ? I vaguely remember needing to have one created (even if not used) so InstallShield will add some required behind-the-scenes stuff. 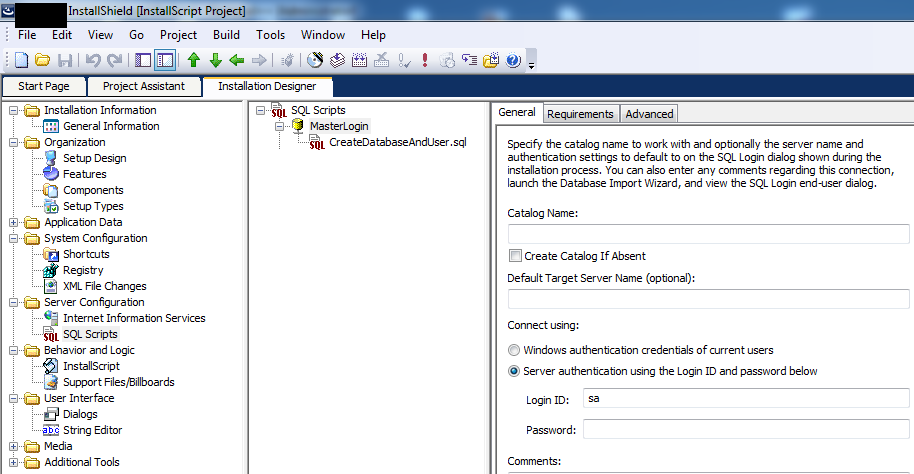 Yup, I have three, in fact. And I can verify that I am able to successfully authenticate to those connections before running the SELECT script that I am trying to run.

EDIT: I see you have a script to create a SQL user? Would you mind sharing some pointers on how you're using that? Like what dialog do you use to get the credentials for the admin user who will create the additional user and how you invoke this script later?

I remembered that I do have one InstallScript MSI project that uses a SQL database connection. At the top of the .rul script for every dialog that uses the SQL connection, it has this block for the #includes (same as above):

and near the top of the "begin" section of every .rul script in the ShowDialog function, it has this block (same as above):


This is a simplified version of what happens when I connect via ADODB via InstallScript to get a value returned. This assumes the query is in the form "SELECT something AS Value FROM sometable".


Other than that, the only thing I can suggest is to create a new blank InstallScript MSI project and try just adding the SQL functionality to it. It's been a long time since I've setup a new project with SQL connectivity, but I don't remember offhand having to manually do something like this: "In my build path, though, I do include "SQLRTConv.obl" library."

Will do, my man! Thanks for all your help.